We have continued to have a fun, interesting and sometimes challenging road trip.  Here are some more snippets of what we have been up to since the first week in August.

Wednesday 9 Aug: we left Lake Cachuma and headed to Death Valley. We were all really impressed with how interesting it was - and hot. Stopped by the Visitor Center where Jon and Daxton got inside in 121 degree weather at 4:50pm before they closed at 5pm. They picked up Junior Ranger books and Jon talked the Ranger into giving him 2 badges - the kids still had to do the book requirements to get the badges, but it meant we were able to get the badges without staying another day. We continued the drive towards Las Vegas and on to the Lake Mead area. We decided to add Hoover Dam (and a hotel due to the heat) to the itinerary.

Thursday 10 Aug: left the cats in the air conditioned hotel room and went to Hoover Dam for a tour. Jon enjoyed the extra security measures of needing to open up the hitch hauler (while the rest of us were in the car with AC) and then all the security people were annoyed with how long it took him to secure it back up. I mean really, there is more stuff in the back of the SUV than in the hauler and you asked to see inside it so then you have to wait for it to be put back together! The Dam tour was not available so we had to settle for the Power Plant tour, which was plenty interesting even to the boys who were reluctant to go in the first place. Our best theory about our boys reluctance is they just had no idea about what a big Dam it is even though we tried to tell them they would really like it. Of course, Daxton, our stubborn one, just complained about being hot the whole time while we were outside and then later told us how much he liked the Dam. It is quite the engineering marvel. We hurried back to get the cats and checked out of the hotel mid-day, then continued on to the Grand Canyon. We got a camp site outside the Grand Canyon (Ten-X for $5/night!) and headed in to see the Grand Canyon. It was extremely impressive.

Friday 11 Aug: we decided to stay another night at the Grand Canyon and took a hike along the South Rim. The kids finished up their Junior Ranger badges for the Grand Canyon. We headed back to camp and enjoyed a pleasant evening.


Saturday 12 Aug: we packed up camp and headed towards Zion. We went back through the Grand Canyon and were able to stop at the Desert Tower along the way out. We arrived at Zion and enjoyed the drive in with the interesting and changing landscape. We got to the Visitor Center, the boys got their books and completed their Junior Ranger Badges. Then we headed out on the free shuttle bus service (no cars allowed into the canyon in the summer) to see the canyon and to do some hiking. We had left the cats in the shade, in the car and with the sun roof open and sun shades closed. We enjoyed seeing the canyon and took a hike to Weeping Rock and out towards the Emerald Pools (again Daxton complained - perhaps this time he was under hydrated or hungry). By now it was dusk and we headed back on the bus and the rain started. We got back to a very wet front seat of our car and drove out of the park. We were able to secure a campsite right outside of the park (the park campsites were full) and set up the tent in the dark and the rain. 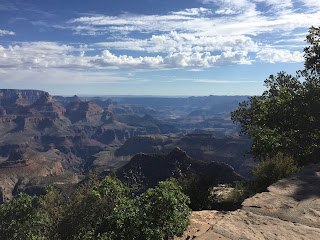 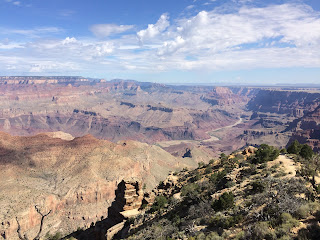 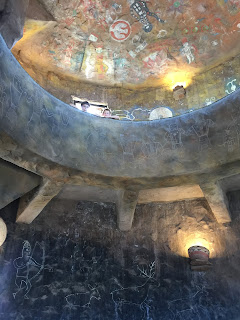 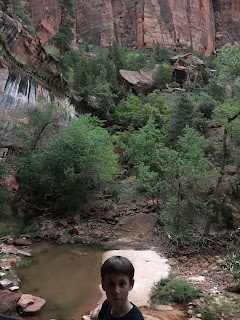 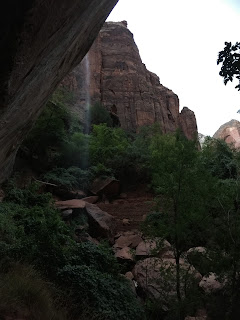 Sunday 13 Aug: we packed up camp and headed to Bryce. As Bryce was only 2 hours away, we wanted to do the park and then continue on to Arches. We got to Bryce, got the Junior Ranger books and headed out to hear a Ranger talk and do a short hike along the rim. Bryce was a highlight and while we had planned to kind of blow through, we ended up staying for almost 4 hours. Then we continued on to Arches. Arches was a bit of a let down, honestly. We arrived just before 6pm and they are doing road construction which closed the road to the Windows area and meant you had to be out of the park by 7pm when the main road closed as well. We drove around and took pictures, then went into Moab to find a place for the night. We ended up at a RV/camp site place that had tent sites packed in close together. The upside was a pool and showers, the down side was the people walking by the tent all night with flashlights. 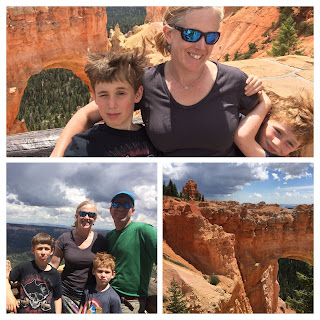 Monday 14 Aug: we decided that Canyonlands was going to be too difficult to see much as it is so big and we didn't have time to really hike into the canyons. The plan was to get to Mesa Verde by the afternoon and Canyonlands just didn't seem to fit in very well with the plan so we decided to go back to Arches so the boys could do their Junior Ranger Badges and we could try to see some Arches. We packed up camp, got in the car and got a coolant light! Thus began the leaking coolant fun (ok, stress) for the next few days. We went to the gas station to buy coolant and then headed back to Arches. We spent the morning in Arches and then headed to Mesa Verde. We were able to secure a camp site at Mesa Verde and got a cliff dwelling tour for the evening. The boys blew through their badges here as they were super interested in every thing. The campsite was nice and shaded and the weather was finally cooler again. 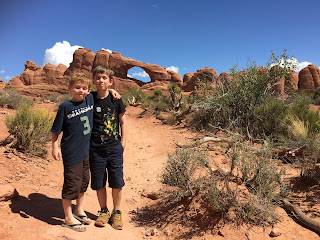 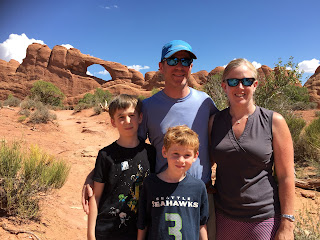 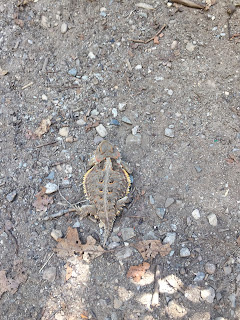 Tuesday 15 Aug: we had a morning cliff dwelling tour scheduled and we all really liked Mesa Verde, so I went to try to get the other, longer cliff dwelling tour (Long House) while the boys went to all-you-can-eat pancakes. We had decided that if I was able to get that tour then we would stay another night. I was able to get a 4 pm tour and we headed off for the day. It was a good day with a tour, a hike and then another tour. We also went into town to get more coolant at Wal-Mart and have dinner out at a Mexican restaurant. 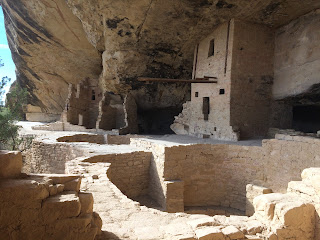 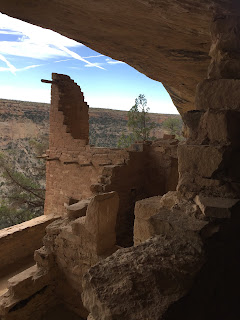 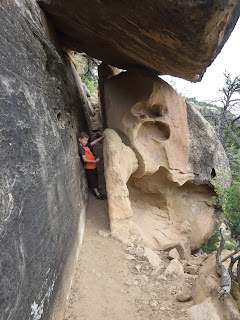 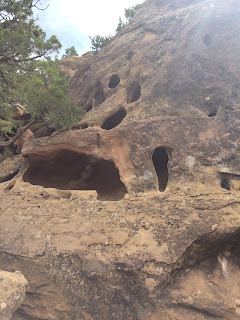 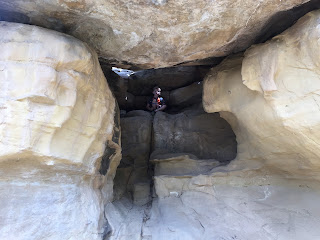 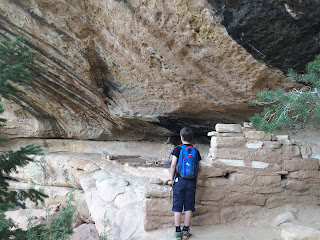 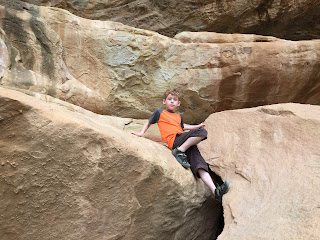 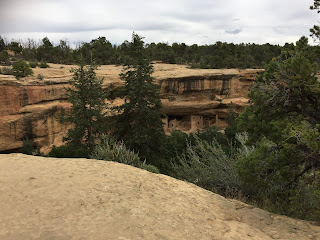 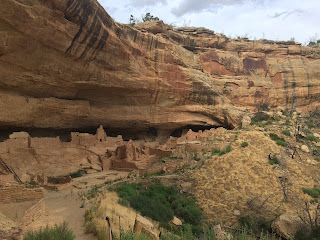 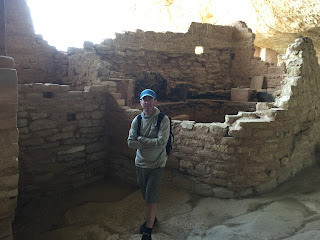 Wednesday 16 Aug: we broke camp and started the 8+ hour drive to Carlsbad Caverns. There were many stops to top off our coolant and a stop to resupply ourselves with more coolant for the next day. We arrived to the Caverns in time to get information at the Visitor Center and get the boys started on their Junior Ranger Badges. Then we headed to the amphitheater for the bat flight. This was one of the coolest things I have ever seen! The Ranger talk was just ok (probably even more so because the Mesa Verde Rangers had been SO great), but then the bats started flying out and she stopped talking. There are about 400,000 Brazilian Freetail Bats in the cave with the babies now beginning to fly. There are an additional 14 other kinds of bats at Carlsbad, but the majority are the Brazilian Freetails. I highly recommend seeing these bats fly from the cave. Carlsbad is supposed to be especially cool because of the flight path they take to get out of the cave based on the cave geometry. We drove out of the park and got a campsite in White City, right outside the park.

Thursday 17 Aug: we went back into Carlsbad Caverns National Park in the morning and secured the King's Palace tour. We spent the morning on that tour and on the Big Room self tour while the cats hung out in the air conditioned park kennel. The kids finished their Junior Ranger Badges - but the park was out of them so they have to wait for this badge to be mailed to us. After getting the cats back we started the 7+ hour trip to get to Jon's parents' house in Denton, Texas. The drive was fine and we stopped to top up coolant along the way - thankfully the Audi told us whenever the coolant was low so no damage to the car was done and Jon's folks got us an appointment with their mechanic for Friday.

Friday 18 Aug: a relaxing down day visiting with Oma and Opa! Laundry was done, the kids played Hay Day on their iPads with Oma, the car got fixed (a leaking hose that was repaired, so not too bad, hopefully the repair holds until the Audi is sold back on 8 Sep!), the kids went swimming and we had a lovely flank steak dinner.

Saturday 19 Aug: we did more visiting, relaxing, some pool time and the rodeo. The rodeo was good, and Daxton won a free t-shirt and sat on a long horn.

Sunday 20 Aug: we went to Dinosaur Valley State Park. The kids got a lesson in throwing a spear with the atlatl. They had learned about it at Mesa Verde and were happy to try it out today! It was quite hot and humid so Ronan was complaining this time. The dinosaur tracks were all under water due to the rains so I said they could go into the water, but not to get their clothes wet....you probably already know how that worked out.
Monday will be the eclipse and pack up. Then we will head North on Tuesday. We hope to visit Hot Springs National Park and then Mammoth Caves National Park next. Then more visits with friends and family. Next update may be from Orlando (surprise Universal Studios trip for Daxton's 8th birthday, don't tell!) before we fly to Paris on 9 September.
at 8/21/2017 10:36:00 AM
Email ThisBlogThis!Share to TwitterShare to FacebookShare to Pinterest